Why You Should Step Back and Listen to Your Employees

Sometimes, I coach CEOs who aren’t always open to listening to their employees. The CEO believes they know what they’re doing. The CEO just wants their employees to execute against the plan to the best of their abilities.

Sometimes, CEOs don’t want to hear from their employees at all because they are worried employees will just complain and bring them problems. Their perspective is “I don’t want to deal with everyone’s problems.” Inadvertently, these CEOs teach their teams to not bring issues to them. Eventually, the performance of the company starts to suffer and they don’t know why.

When this happens, I point out to the CEO that they are shutting off communications with their team. I point out that the CEO is at fault for the lack of performance for the company and that their “not listening” was one of the reasons why. I teach my CEOs how to be coachable. Being coachable means listening to your coach and doing what the coach suggests, even when you don’t want to do it.

Step Back and Listen to Your Employees

To address the fear of having to deal with everyone’s problems, we adopted a management principle: “Don’t bring me your problems without bringing me your recommendation on how to solve the problem.”

With this principle in place, my CEOs are prepared to listen. Here are some examples of what happens when you start to listen to your employees:

One CEO client of mine learned that some of their customers were only moderately happy with the product. The CEO thought customers were very happy but learned that they weren’t really that happy and were thinking about changing vendors. The CEO’s team recommended changes to the product roadmap to address these customer concerns. These product improvements turned out to have a significant positive impact on sales and churn reduction.

Dealing with a Problematic Employee

This CEO also learned that one of their team members was very problematic. The CEO kind of knew this, but mainly ignored this issue, hoping it would go away. (Never a good strategy.) Individual members of the leadership team pointed out not just the problem, but the impact of this individual on others’ performance. They recommended the CEO step in and counsel this person. It wasn’t easy, but the CEO eventually had to terminate this person. Without the input of the leadership team, the CEO would have probably kept this person around without understanding the negative impact they were having on everyone else.

Finally, the CEO learned that sales and client success people were seeing early indicators of a slowdown. This caused the CEO to go on high alert to figure out what was happening. By listening even more, the CEO saw what was happening even before the KPIs indicated a slowdown. Based on listening to these early warning signals, the CEO immediately changed the company’s strategy enabling them to survive a recession.

This shift from not listening to listening wasn’t as simple as it sounds. First of all, the CEO had to trust in my coaching. They didn’t want to make the change to become a listener.

Changing Management Principles Within Your Organization

Secondly, my CEO had to teach the entire organization a new way of operating. Remember the management principle “Don’t bring me your problems without bringing me your recommendation on how to solve the problem?” Making this way of managing work was not like turning on a switch. It was a journey. But it was a transformational journey.

At first, when the CEO told people not to bring them problems, the employees didn’t know what to do. Wasn’t it the job of the CEO to solve problems? The CEO was the person with all the information and power — what was the employee supposed to do when they didn’t know as much as the CEO did?

Before (if the CEO listened at all), they would jump in and tell the employees what to do. The CEO made the employee’s job easier by solving the hard problems for them. With this new management principle, the CEO was no longer the problem-solver.

Then a magical thing happened.

The CEO’s best employees realized that the CEO was just going to approve their recommendation for the next challenge they faced, and they stopped bringing the CEO recommendations and just did what they thought was best.

My CEO had always said it is better to ask for forgiveness than permission. They developed a way of working with their team where their direct reports owned their areas of responsibility fully. The direct reports became better and better at their jobs by solving their own problems and executing against them.

Ironically, by listening to employees and teaching them how to solve their problems on their own, the CEO got to listen to a lot more success stories and a lot less complaining.

Most importantly, my CEO’s team and company achieved things they never thought possible.

My name is Glenn Gow, the Peak Performance CEO Coach. I love coaching CEOs and want to help make you an even better CEO. Let’s decide if we are a fit for each other. Schedule a time to talk with me at calendly.com/glenngow. I look forward to speaking with you soon. 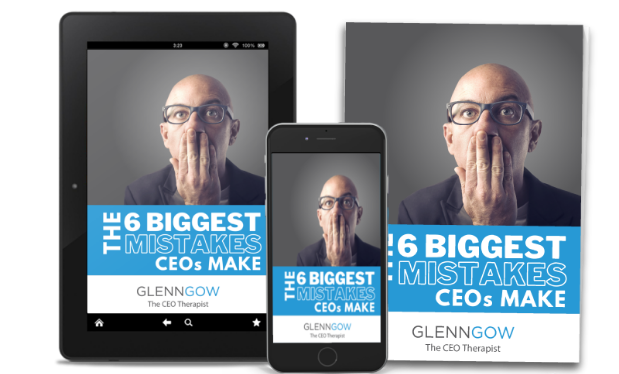